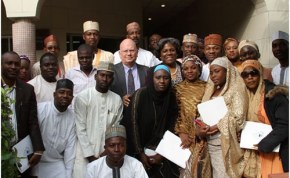 Washington, DC — Today, the House Foreign Affairs Committee, chaired by U.S. Rep. Ed Royce (R-CA), passed H.R. 2548, the Electrify Africa Act, as amended, which will improve access to electricity in sub-Saharan Africa, through a comprehensive U.S. government approach to electricity projects in the region, at no cost to the U.S. taxpayer.

[A summary of today’s Committee action, including adopted amendments, is available HERE.]

Chairman Royce on the legislation’s passage: “Today’s important legislation offers a market-based, strategic framework to bring affordable and reliable energy to many of the 600 million people in sub-Saharan Africa who currently have none. With nearly one billion consumers, the African continent has great economic potential.

“The Electrify Africa Act mandates a clear and comprehensive U.S. policy, so that the private sector can proceed with the certainty it needs to generate electricity in Africa – at no cost to the U.S. taxpayer. We need to be engaged. Where the United States has left a void for economic investment in Africa, China has stepped in to direct nearly $2 billion towards energy projects on the continent. If the United States wishes to tap into this potential consumer base, we must act now.”

· requires that the Administration create a comprehensive strategy to help increase electricity in sub-Saharan Africa;

· encourages the U.S. Agency for International Development (USAID) to use existing tools such as loan guarantees, partnerships and grants to increase electricity in sub-Saharan Africa;

· directs the Treasury Department to persuade the World Bank and African Development Bank to increase electrification investments in sub-Saharan Africa; and

Information about H.R. 2548, including the introduced bill text, the amendment in the nature of a substitute offered by Chairman Royce and Ranking Member Engel, and a section-by-section summary are available HERE.

South Sudan is witnessing a “new wave of repression”, global rights group Amnesty International warned Friday, with many activists now in hiding after a string of arrests in the conflict-wracked country.The world’s newest nation has suffered from chron…

U.N. High Commissioner for Human Rights Michele Bachelet warns a proliferation of human rights violations around the world is eroding fundamental freedoms and heightening grievances that are destabilizing.Presenting a global update Friday to the U.N. H…

Pakistan Press Foundation (PPF) in a letter to Ellen Johnson Sirleaf, President of Liberia expressed concern over the arrest of Festus Poquie, editor of New Democrat newspaper the UK-based Daily Mail. PPF Secretary General Owais Aslam Ali in his letter urged the Liberian government to order for a speedy investigation into the matter. According to […]