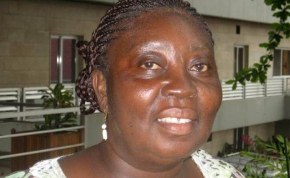 Monrovia — On the morning of August 2, 1991, Anna Musu Sherman fled fighting and famine in Liberia’s capital, but she couldn’t outrun fear.

Wearing a grey T-shirt and worn down flip flops, she tied 18-month-old Tetee to her back with a colorful cloth, clutched a cord she had attached to ten-year-old Sata, and set out in the rain, aiming for a refugee camp across the border in Sierra Leone 100 kilometers (about 60 miles) away. An umbrella or plastic sheeting to shield her daughters would have slowed her down.

Thousands of others trudged the same roads, as rival warlords made the country a battle zone. The city center was sealed off, and barely a cup of rice or palm oil could be found. Rape was rife. Fetching water from a pump was a life-threatening chore.

West African forces had arrived to monitor a cease-fire, but it was broken within days of its signing. Charles Taylor, who had launched the conflict – and is now on trial in The Hague for war crimes – threatened to kill all the peacekeepers.

For eight days, Anna moved northwest through forests and empty villages, her body caked with mud, Tetee all but molded to her back. She dug up cassava tubers from abandoned fields, and she and Sata ate them raw. She chewed them into a mash for Tetee.

On the ninth day, still hours from the border, she fell to her knees to rest at a village called Tne. Near her lay a woman, a bundle strapped to her back. As Anna moved closer, she saw, to her horror, that the woman had been decapitated – but a weak cry signaled that the bundle on her back was a baby.

Already struggling with two starving, exhausted children, Anna untied the cloth and cradled the tiny baby close through the night, alongside Tetee and Sata. At first light, Anna strapped the infant to her back, placed Tetee on her left hip, dragged Sata on the rope with her right hand and struggled ahead. She was desperately worried that the rope would snap and Sata would be lost in the sea of other refugees pushing to reach the border before it closed at 6PM. She was one of the last to cross at 5:58 PM on August 12.

At Pujuhan refugee camp, she met someone she never forgot. Alexander Clarke was waiting and hoping that his own wife would cross. He took them in, gave them hot chocolate, and let them sleep until they had the strength to move on, finding refuge with others.

Seven years later, with Sata, then sixteen, Tetee, nine, and the six-year-old she had named Sarah, Anna returned to Liberia. It was still unstable, but war had spread in Sierra Leone, accompanied by atrocities that horrified the world, including the dismemberment of children. She scraped by from buying vegetables, canned food and other produce wholesale and re-selling it on the street. But a more durable west African-brokered peace – demanded by a strong women’s movement and bolstered by a muscular United Nations peacekeeping force – finally came.

Today, Anna is a symbol of Liberia’s rebirth, despite the continuing challenges of re-building. She finished school, attended college and raised her three daughters, all of whom have college degrees. At 53, she is a Line Manager of Pepper Byrd Travel and Road Tours.

Late last year, Anna was a tour guide for a philanthropy delegation from Forbes. She introduced the philanthropists to the Love a Child orphanage in Cotton Tree, some 45 kilometers outside of Monrovia. Anna said the institution was a hopeful place – and she wanted to show the visitors how its proprietors, Rebecca and George Wreh, were operating the eight-room cinder block facility and adjoining primary school as an extended family for the 38 children under their care.

Two generations of Liberians, Anna said, have been lost to war. The bulk of the voting age population, 35 years and younger, did not have the opportunities she did has a teenager, and there are not enough classrooms or jobs to ensure their futures. She hopes an international community that largely stood by as Liberia crumbled will do more to help it recover.

Postscript: Anna’s benefactor when she arrived in Sierra Leone, Alexander Clarke, was reunited with his wife in November 1991 at a refugee camp in Cote d’ Ivoire, far on the other side of Liberia.

K. Riva Levinson is Managing Director, KRL International LLC, a consultancy working in the world’s emerging markets. Riva has been an advisor to Liberian President Ellen Johnson-Sirleaf since 1997.