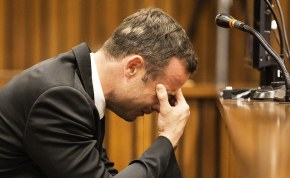 Pretoria — An ex-girlfriend of Oscar Pistorius on Friday portrayed him in court as a man obsessed with firearms who often woke her up at night because he feared somebody was breaking into his house.

Samantha Taylor, testifying on day five of Pistorius’s murder trial, stressed that during their relationship Pistorius always alerted her when he suspected there was an intruder.

The former girlfriend recalled one night when Pistorius heard something hit against the bathroom window.

“He woke me up and asked if I had heard it. I told him it was probably the storm,” said Taylor.

Pistorius on Monday pleaded not guilty to the premeditated murder of Reeva Steenkamp, a blonde model for whom he left the teenaged Taylor.

He claims he believed he was targeting an intruder when he fired four shots into a locked bathroom, fatally injuring Steenkamp.

Taylor’s testimony on Friday, cast Pistorius as a paranoid and aggressive man who frequently argued with her, and was extremely attached to his cellphones and his handgun.

On one occasion he fired a 9mm pistol through the sunroof of a car while driving with her and a friend, she said.

“There was a lot of commotion in our relationship,” she said, adding that it ended for good when he attended an award ceremony with Steenkamp.

“He cheated on me with Reeva Steenkamp.”

He said the young woman, who was 17 when she started dating Pistorius, was lying about when their relationship ended and that he would provide copies of their emails to prove this.

Judge Masipa briefly adjourned the court, before Roux resumed questioning and set out to show Taylor’s recollection of events during her relationship with Pistorius was unreliable.

This included her account of the night he drew his gun at a car he believed had followed them to his home.

Taylor said it was not true, as Pistorius claimed, that he had merely moved to her side to protect her.

The next witness was the chief security guard at the Silver Woods estate where Pistorius shot Steenkamp in the early hours of February 14 last year.

Pieter Baba too became emotional on the stand after describing the events of that night and recalling his shock when he saw Pistorius carry a fatally wounded Steenkamp down the stairs of his house.

Baba said following reports of gunshots at the athlete’s home, he had called Pistorius, who told him everything was fine.

“Mr Pistorius said to me, ‘security, everything is fine’,” Baba said.

“I heard that he was crying,” he added.

But he told his colleague Jacob who was with him that he was sure that something was wrong. Pistorius then phoned him back, perhaps by accident, and simply sobbed before the line went dead.

“I immediately told Jacob everything is not right.”

Roux tested his recollection too, asking whether Pistorius said “he is okay” or “everything is okay”, and whether he said “okay” or “fine”.

An exasperated Baba sighed, lowered his head and slowly repeated: “My Lady, the exact words were ‘security, everything is fine’.”

Earlier this week, Johan Stipp, a radiologist and neighbour of Pistorius, testified that he found him crying next to a dying Steenkamp at the bottom of the stairs.

By then Steenkamp had lost all pulse and it was too late to save her life, he said.

During cross-examination of Stipp on Friday, Roux challenged his recollection that Pistorius told him that he shot Steenkamp because he believed she was an intruder.

“Mr Pistorius says he can’t remember telling you he thought she was an intruder… He recalls asking you to help him,” said Roux.

But Stipp maintained that Pistorius had given him this explanation.

“I shot her. I thought she was a burglar. I shot her,” he quoted Pistorius as saying.

Roux has doggedly tried to cast doubt on the credibility of every witness since the trial began on Monday.

He has put it to Stipp and other neighbours it was impossible that they were woken, as they claim, on the night Steenkamp died by a woman’s screams followed by gunshots.

Roux claims it was in fact Pistorius who they heard scream, and that his voice could easily be mistaken for a woman’s because it rose when he was distraught.

The trial will resume on Monday morning.