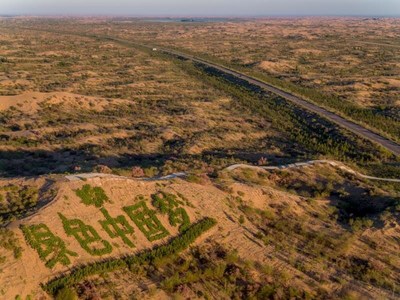 Initiated in 1978, the program was planned to last 70 years, creating a 4,480km long green belt along China’s north frontiers to hold back the expanding Gobi Desert, and prevent soil erosion, land degradation, and now it has taken on additional importance for storing carbon dioxide to tackle global warming.

With an estimated investment of 5.5 billion RMB, the program has created a total afforestation area of more than 30 million hectares in the past 40 years, which has increased the forest coverage from 5.05% in 1977 to 13.57% and has helped reduce 11,479 km² of desertified areas in the three northern regions of China between 2009 and 2014 alone, according to the administration.

“The greening project of Kubuqi Desert is an important part of the Three-North Program,” said Wang. “I think what distinguishes the Kubuqi project is that Elion has created the market-oriented Kubuqi model, which boosts the local economy during the process of combating desertification. We have reclaimed more than 6,000 km² of the Kubuqi Desert, and this can’t happen without the joint participation of the government of Inner Mongolia, local residents of Kubuqi, and Elion, as an ecology company that provides technologies, experts, investment and job opportunities in this project. ”

The Kubuqi Desert, located in Inner Mongolia, is the seventh largest desert in China, with a total area of 18,600 km2. It is also the closest desert to Beijing and used to be one of the major sources of sandstorms hitting Beijing and the Tianjin Region.

Over the past three decades (the Elion Kubuqi Greening Project started in 1988), Elion has devoted persistent efforts to have restored one third of the desert and lifted more than 100,000 local residents out of poverty by developing eco-industries, such as solar power generation, tourism, and desert agriculture, in the Kubuqi Desert. As evaluated by the UN Environment, Kubuqi has been generating more than 72 Billion USD green wealth based on eco-restoration. The annual income of local residents has been raised from less than 110USD per capita to more than 2,500USD per capita. Kubuqi is now recognized as a green economy model by the Chinese government and the UN Environment Programme.

The Kubuqi model is now being shared in other parts of the world as Elion expands its business in African countries, including Nigeria and Morocco.

“Since the reform and opening up, the Chinese government has been encouraging private sectors to participate in public programs,” Wang said. “The Kubuqi model is a vivid example of this type of partnership, and it actually helps, because as a private company, we want to make sure every dollar we spend counts, so we are motivated to develop our technologies and enhance the survival rate of the saplings, also to focus on economic crops. Apart from Kubuqi, Elion is also responsible for another section of the Three-North Program in Hebei Province for the 2022 Winter Olympic Games.

“China effectively succeeded in not only halting the desert but in reversing the desertification. The Three-North program is the world’s largest afforestation and reforestation program and also a resounding success. This program has made a highly significant contribution to the global efforts towards protecting the eco-system and maintaining eco-system security,” said Alexander Buck, the executive director of International Union of Forest Research Organizations (IUFRO) during a meeting in Beijing for the 40th anniversary of the Three-North Program.

Indeed, tackling global issues such as climate change and desertification requires united efforts worldwide at all levels. Not only China but also African countries are building their wall of trees to fight against desertification. Launched in 2007, the Great Green Wall, is an African-led movement with an epic ambition to grow an 8,000km natural wonder of the world across the entire width of Africa. The Wall promises to be a compelling solution to the many urgent threats not only facing the African Continent, but the global community as a whole – notably climate change, drought, famine, conflict and migration.

FTC Solar is taking orders for Voyager+ with support for large-format modules AUSTIN, Texas, Feb. 8, 2021 /PRNewswire/ – FTC Solar today announced the release of Voyager+, the next generation of its single-axis Voyager tracker, engineered to provide compatibility with new large-format solar modules now entering the marketplace. The large modules entering the market are built to incorporate larger solar cells, which are the energy-producing heart of each […]