MOSCOW, Nov. 30, 2017 /PRNewswire/ — Hisense, an official sponsor of the 2018 FIFA World Cup Russia™, is proud to announce that it is inviting footballing legend Ruud Gullit to take over their Twitter and Facebook during the Final Draw for 2018 FIFA World Cup Russia™. As a proud sponsor, Hisense have created the unique opportunity as part of their global engagement activities for the tournament. 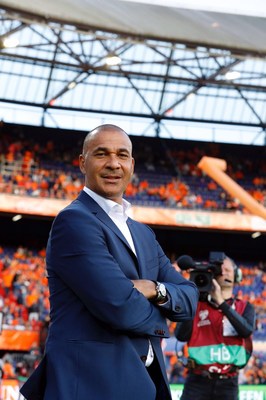 As one of the world-leading providers of televisions, Hisense will manage a live interaction between Ruud and fans across the world, as the groups and first fixtures for the participating 32 teams are announced in the Moscow Kremlin, on Friday 1st December at 3pm GMT. During the Final Draw, Ruud will be in a Hisense studio directly responding to fans’ tweets with personalized video replies and giving his unique take on the draw as it unfolds using the hashtag #RuudReacts.

Ruud Gullit, who captained the Netherlands national team and was a member of the 1990 FIFA World Cup™ squad said: “I’m so thrilled to be part of such a momentous occasion with a world class brand like Hisense. The World Cup can be an emotional tournament and this is when the rollercoaster begins! The Hisense team created a really fun way to interact with fans and tap into the storylines surrounding the Final Draw, and I’m excited to hear what they think about the results. I’m sure some will be celebrating, whilst others commiserating – but it’s all just the start of a wonderful journey!”

Zhu Dan, VP of Hisense International, added: “The Final Draw is an important milestone and marks the official start of the World Cup festivities with fans watching on TVs around the world. When the groups are revealed it’s always a nerve racking but also extremely exciting moment. As the Official Television of the 2018 FIFA World Cup™, we’re delighted to bring Mr. Gullit on to be part of the event and help make the occasion extra special for the fans using our ULED TVs.”

“The event is also a special moment for our brand. As we continue to grow globally, we aim to use this sponsorship to deliver more experiences and provide additional value for our customers. We are honoured to be an official sponsor of the world’s most watched event in sports, and believe that the competition will vastly improve the international awareness and value of the Hisense brand.”

Hisense’s sponsorship with the 2018 FIFA World Cup Russia™ is a significant sports marketing event sponsorship. As Hisense expands its business worldwide, sports marketing continues to play a very important role in introducing the Hisense brand to a global audience.

[Africa Top Sports]It’s done! Mamelodi Sundowns are champions of South Africa. This is the result of their 3-0 victory Tuesday over SuperSport United. At day of the end, Brazilians can gloat. They have 4 points ahead of the second, Kaizer Chiefs, doubl…

A Tale of 2 COVID Vaccine Clinics: Lines in Kenya, Few Takers in Atlanta

NAIROBI – Several hundred people line up every morning, starting before dawn, on a grassy area outside Nairobi’s largest hospital hoping to get the COVID-19 vaccine. Sometimes the line moves smoothly, while on other days, the staff tells them there’s n…