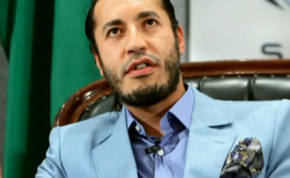 Niger has extradited the son of former dictator Moammar Gadhafi, according to the Libyan government. Saadi Gadhafi has arrived

in Tripoli and been brought to a prison.

“The Libyan government received today Saadi Gadhafi and he arrived in Tripoli,” the cabinet of Prime Minister Ali Zeidan said in a statement on Thursday.

Libya’s interim government had been seeking the extradition of Saadi, who took refuge in the country’s southern neighbor Niger after the 2011 NATO-backed uprising that toppled his father.

Libyan authorities thanked the Niger government for its cooperation in handing over Saadi and promised he would be treated “in accordance with international law.”

A government-backed militia website showed what it said were photos of Saadi wearing a blue prison uniform, while Libyan news websites ran pictures showing him with his head shaved in prison.

Saadi, who is the former commander of Libya’s special forces and an ex-footballer, is one Gadhafi’s seven sons. He is not wanted by an the International Criminal Court (ICC), however, unlike his brother Seif al-Islam. But Libya wants to try him for allegedly misappropriating property by force and alleged armed intimidation while he was head of the country’s football federation.

Better catch the moon’s disappearing act Tuesday — there won’t be another like it for three years. The total lunar eclipse will be visible throughout North America in the predawn hours — the farther west, the better — and across Asia, Australia and the rest of the Pacific after sunset. As an extra treat, Uranus […]

NEWPORT BEACH, Calif., June 22, 2015 (GLOBE NEWSWIRE) — House of Sillage, a leading name in the world of Haute Parfumerie, is delighted to announce the much-anticipated release of its very first Men’s fragrance, DIGNIFIED by House of Sillage. Created for the man who provokes envy and admiration, a new class of man who cares […]

[Africa Top Sports]Mathilde Petitjean Amivi is little known by Togolese. And yet she is the barely 19-year-old girl who chose to compete for Togo at the 2014 Winter Olympic Games in Sochi, where she will be part of a delegation of three athletes.