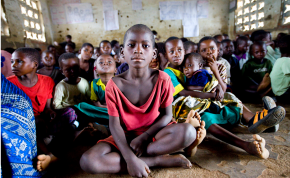 “Do whatever your husband tells you to. Don’t say no when he wants sex. Persevere when he beats you because there are lots of problems in marriage.”

This is the advice 13-year-old Chipeta’s grandmother gave her prior to marrying her 23-year-old fiancé.

Chipeta (not her real name) lives in Lilongwe, Malawi and, like half of all girls in the country, was married before age 18. That meant entering a relationship that—far from providing her with love and support—put her at heightened risk of multiple forms of abuse. United Nations and other studies show girls who marry as children are more likely to experience physical, sexual, psychological, and emotional abuse, are less likely to complete their education, and may suffer disproportionately from pregnancy-related injuries and even death.

A new report by Human Rights Watch released this week documents scores of cases like Chipeta’s. In interviews with more than 80 women and girls, we heard from girls who had once dreamed of being teachers, doctors, and lawyers, but who saw those dreams dashed by being married too young. We spoke to those who had never been happy in their marriage, who wished for an education, financial independence, and autonomy. And even worse, we spoke with several girls in abusive marriages who had been told to “persevere” – that violence at the hands of one’s spouse could not be escaped.

After taking office in 2012, President Joyce Banda of Malawi committed to raising the minimum legal age to marry from 15 to at least 18. In November 2012 the government said a directive from the president gave it the authority to do so. But Banda has since seemed to backpedal on this promise.

The Marriage, Divorce and Family Relations Bill, the legislation for raising the minimum age for marriage, has been in the making for the last eight years. Public support of the bill raised expectations that it would be presented before Parliament in 2013, however late last year the president stated that more time was needed to engage stakeholders and devise a bill that would be acceptable to all Malawians. The silence on the status of the bill signals a lack of commitment that the country’s women and girls simply cannot afford.

Malawi is among the 25 countries in the world with the highest maternal mortality rates, and teen pregnancies account for a quarter of all deaths among girls and women age 15 to 19. The link between these deaths and early marriage is clear – in a context where the pressure is high to have children quickly after marriage, girls whose bodies are not yet fully developed face abundant health risks in childbirth, including obstetric fistula, premature delivery, anemia, and maternal death. Such complications place a significant burden on Malawi’s already inadequate health system.

While the factors that drive early marriage are complex, involving deeply entrenched issues such as poverty, gender inequality, and patriarchal values, these complexities do not excuse Banda from making the necessary decisions that will begin to end this practice.

The United Nations Office of the High Commissioner for Human Rights is drafting a report on child marriage in advance of the Human Rights Council panel discussion in June and a UN General Assembly meeting in October. Both will present an opportunity for concerned governments to push for a program of action to end child marriage, including calling for a clear minimum marriage age of 18 for both boys and girls.

President Banda once claimed, in regard to her career success despite her modest background, “my greatest achievement is that I make bold decisions and take risks when other people won’t.”

It’s time for Banda and others to step up and make the bold decisions that will enable women and girls to pursue their own successes and realize their rights to education, to health, and to marry with full and free consent.

Camille Pendley is an associate in the Women’s Rights Division at Human Rights Watch. Human Rights Watch is a member of Girls Not Brides: The Global Partnership to End Child Marriage. You can follow her on Twitter @camillependley.

The U.N. high commissioner for human rights, Volker Turk, says the escalating hostilities in Ethiopia’s northern Tigray region are taking a devastating toll on the civilian population and must stop. Lisa Schlein reports for VOA from Geneva. U.N. rights chief Volker Turk is alarmed at the latest surge of airstrikes launched on the Tigray region […]

DAKAR — A 48-hour strike by air traffic controllers in West and Central Africa has been suspended, their union said Saturday.   The strike, which started Friday, has disrupted flights across the region and left hundreds of passengers stranded at airports Saturday.   The Union of Air Traffic Controllers’ Unions (USYCAA), which called the wildcat […]

The U.S. government says more African voices are needed to challenge Russia’s aggression against Ukraine. This week, most African countries voted in favor of a U.N. resolution condemning the conflict in Ukraine waged by Russia. But experts say African …