The lighthearted letter looks to update the apple from Original Sin to Original Snack, and shine the global spotlight on the importance of good nutrition for all

SINGAPORE, July 1, 2022 /PRNewswire/ — The calamity of original sin – and the apple’s role in it – is undeniably the most catastrophic PR disaster fruit has ever faced. Today, in honor of International Fruit Day, the Dole Sunshine Company (DSC) issued an open letter to His Holiness, Pope Francis, via La Repubblica, seeking absolution for the apple. DSC is asking to redeem the reputation of fruit to celebrate it as the Original ‘Healthy’ Snack instead. 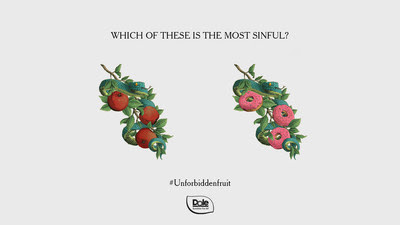 For thousands of years the apple has faced this vilification after Eve took a bite from the ‘forbidden fruit’ in the Garden of Eden. In a fun but hopefully fruitful manner, DSC is looking to reverse this vilification and has requested Pope Francis to absolve fruit of its misconceived role in Original Sin. The letter – a humorous and unprecedented plea to the Pontiff – is meant to spark global dialogue around the importance of fruit for a nutritious diet and focus in on fruit’s benefits and overall global accessibility.

“We understand that requesting this change is a bold and provocative ask, and we of course mean no disrespect to His Holiness or The Church,” said Pier Luigi Sigismondi, President of Dole Packaged Foods & Beverages Group. “We believe if we can resolve this misrepresentation of fruit, we can start a new global narrative that focuses on its benefits, and creates new, healthier eating habits that are consistent to our purpose to bring good nutrition to all.”

The letter – published in the only newspaper Pope Francis has stated he reads – respectfully points out that even though the apple was never mentioned by name in the Bible, that this fruit, in particular, has been the recipient of slander since it was wrongfully associated with Original Sin. And, in a world where there are clearly more sinful and decadent foods to reach for, the apple should no longer be considered forbidden. Rather, DSC argues that fruit itself can be the hero, and the impetus for a change in conversation around healthy eating and a driver for better nutrition globally.

DSC concludes the letter with this humble, yet compelling request to Pope Francis:

“For all these reasons and more, we humbly ask for the absolution that only you can offer. A tiny change that can change the world. Would you consider amending the Bible? Just a tiny word. Replacing ‘fruit’ for any other unhealthy food, for instance? Just an idea. If that request sounds a bit too ambitious, no worries. We get it. Maybe then a message of support would go a long way to restoring the world’s faith in our beloved fruits.”

View the letter in full – which appeared today in Pope Francis’ newspaper of choice, La Repubblica – at DoleSunshine.com.

About the Dole Promise

In June 2020 Dole Asia Holdings announced The Dole Promise, with its three pillars around nutrition, sustainability, and the creation of shared value.

Better for People: Access to sustainable nutrition for 1 billion people by 2025, moving towards zero processed sugar in all Dole Packaged Foods products by 2025.

Better for Planet: Working towards zero fruit loss from Dole farms to markets by 2025, aiming for zero fossil-based plastic packaging by 2025. Working towards net zero carbon emissions in Dole operations by 2030.

Better for all Stakeholders: Dole will continue to positively impact all farmers, communities and people working for Dole – through its commitment to equal opportunity, living wages, and an ever-increasing level of safety, nutrition, and wellbeing. The company also seeks to advance human rights within the direct operations and supply chains by building a culture of transparency and accountability. The company also aims for a 50% increase in the value of its business by 2025.

The Prize’s 44th session awards eminent figures in each of its Arabic Language & Literature and Service to Islam categories Riyadh, March 29, 2022 (GLOBE NEWSWIRE) — Two mathematicians and a scientist were among this year’s King Faisal Prize’s seven laureates who received their prizes on 29 March in Riyadh, Saudi Arabia, for having enriched […]