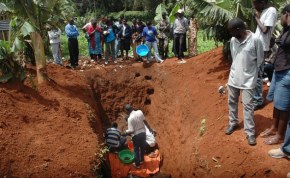 Rwandan genocide survivors exhuming the bodies of their relatives killed and buried in a mass grave during the 1994 100-day massacre.

During the Rwandan genocide, Jean Bosco Uwinkindi is alleged to have issued orders to kill. Detained in Uganda in 2010, an international tribunal has sent him back to Rwanda where his trial is about to begin.

Jean Bosco Uwinkindi is the first suspect in a genocide case to be transferred from the International Criminal Tribunal for Rwanda (ICTR) in Arusha, Tanzania to the Rwandan national court system.

The trial of the former Pentecostal pastor, who is accused of genocide and crimes against humanity, starts in Kigali on Wednesday (26.02.2014).

It is alleged that he commanded a group of Hutus who hunted down and killed Tutsis during the 1994 Rwandan genocide and that 2,000 corpses were found near his church. Uwinkindi insists he is innocent.

The ICTR issued a warrant for his arrest in 2001; he was first taken into custody in Uganda in 2010. He was then transferred to the ICTR in Arusha before being brought back to Rwanda in April 2012.

Albert Gasake describes the trial of Uwinkindi as historic. Gasake is a practising lawyer in Rwanda who works for Survivors Fund (SURF), which seeks to help survivors of the Rwandan genocide to rebuild their lives. “We believe that the transfer of Uwinkindi to Rwanda amounts to recognition for the victims of the genocide and for their struggle for justice,” he said. “These crimes were committed in Rwanda. Rwandan civil society will now be able to follow events much more closely and watch how the court handles the accused,” Gasake explained.

Trying to cope with the legacy of the genocide

The year 1994 witnessed the darkest chapter in the annals of Rwandan history. Within 100 days, Hutu extremists slaughtered three quarters of the Tutsi minority and many moderate Hutus.

Some months after the bloodshed ended, the UN Security Council set up the ICTR in neigboring Tanzania. Its task was to prosecute persons responsible for genocide and other serious violations of international humanitarian law.

Over the last 20 years, the court has handed down 44 verdicts, including several acquittals. Those convicted had orchestrated the mass murder. They included ministers, journalists, high ranking military officers and civil servants. 17 cases are still at the appeals stage. The ICTR is bringing these last cases to a close, because its mandate expires at the end of 2014.

For victims’ representatives such as Albert Gasake, it is important that the survivors have the opportunity to be part of the legal proceedings, which was not possible in Arusha. Gasake hopes the survivors will receive compensation if Uwinkindi is convicted.

“It is a law court that has taken a rather one-side approach,” said Gerd Hankel, expert on Rwanda at the Hamburg Institute for Social Research. He was referring to the ICTR, which he said had focused only on crimes committed by the Hutus. “Crimes committed by the other side are taboo,” he added. The “other side” being the Rwandan Patriotic Front (RPF) which was led by Paul Kagame, the current Rwandan president who is credited with bringing the genocide to an end. The RPF is still the ruling party in Rwanda and is suspected of committing atrocities both before and after the genocide ended.

Can Rwanda guarantee a fair trial?

Hankel regards Uwinkindi’s upcoming trial with some skepticism. “The Rwandan judiciary is highly politicised and the principle of being innocent until proven guilty, as we understand it, doesn’t exist,” he said. Hankel has followed numerous trials in Rwanda and says in many cases the courts were biased. “Why should it be different this time?” he asked.

Gasake is rather more optimistic. “The Rwandan legal system is prepared for this trial,” he said. There were a number of reforms before Uwinkindi was transferred from Arusha. Discrepancies had been found in court rules.

ICTR observers will be on hand to ensure that the trial is fair. They will be in court and monitor whether the proceedings are in accordance with international standards. “This trial is going to be under surveillance,” Hankel said. Rwanda agreed to this because it wants to improve its image abroad.

The trial against Uwinkindi sets a precedent in Rwandan law and further cases against other genocide suspects, previously charged by the ICTR, are expected to follow.

Observers believe that Rwanda, ruled by President Paul Kagame, is anxious to improve its image abroad

Outside Rwanda, there are several cases in progress against suspects alleged to have orchestrated the genocide, or against others believed to have assisted them.

A German court handed down its first verdict in a case relating to the Rwandan genocide on February 19, 2014. Ex-mayor Onesphore Rwabukombe was found guilty in Frankfurt of being an accessory to genocide and sent to prison for 14 years.

Former Rwandan intelligence chief Pascal Simbikangwa has been on trial in Paris since the beginning of February 2014. He is accused of having supplied the Hutu militia with weapons and of running the road blocks at which members of the Tutsi minority were stopped and then killed with machetes.

“I think there is a growing awareness in many countries that genocide is a crime that cannot be tolerated and that one must take action and punish the culprits,” said Hankel. Even if those crimes were committed 20 years ago.

JOHANNESBURG – Rabbit meat is a slowly growing part of Africa’s diet, with a burgeoning industry in South Africa and Nigeria, and a group of hardcore rabbit farmers promoting the meat as cheap, healthy and environmentally friendly. But will it take off…