For their first trip to a celebrated robotics contest for high school students from scores of countries, a team of Ukrainian teens had a problem.

With shipments of goods to Ukraine uncertain, and Ukrainian customs officers careful about incoming merchandise, the group only received a base kit of gadgetry on the day they were set to leave for the event in Geneva.

That set off a mad scramble to assemble their robot for the latest edition of the “First Global” contest, a three-day affair that opened Friday, in-person for the first time since the pandemic. Nearly all the 180-odd teams from countries across the world had been preparing their robots for months.

“We couldn’t back down because we were really determined to compete here and to give our country a good result — because it really needs it right now,” said Danylo Gladkyi, a member of Ukraine’s team. He and his teammates are too young to be eligible for Ukraine’s national call-up of all men over 18 to take part in the war effort.

Gladkyi said an international package delivery company wasn’t delivering into Ukraine, and reliance on a smaller private company to ship the kit from Poland into Ukraine got tangled up with customs officials. That logjam got cleared last Sunday, forcing the team to dash to get their robot ready with adaptations they had planned — only days before the contest began.

The event, launched in 2017 with backing from American innovator Dean Kamen, encourages young people from all corners of the globe to put their technical smarts and mechanical know-how to challenges that represent symbolic solutions to global problems.

This year’s theme is carbon capture, a nascent technology in which excess heat-trapping CO2 in the atmosphere is sucked out of the skies and sequestered, often underground, to help fight global warming.

Teams use game controllers like those attached to consoles in millions of households worldwide to direct their self-designed robots to zip around pits, or “fields,” to scoop up hollow plastic balls with holes in them that symbolically represent carbon. Each round starts by emptying a clear rectangular box filled with the balls into the field, prompting a whirring, hissing scramble to pick them up.

The initial goal is to fill a tower topped by a funnel in the center of the field with as many balls as possible. Teams can do that in one of two ways: either by directing the robots to feed the balls into corner pockets, where team members can pluck them out and toss them by hand into the funnel or by having the robots catapult the balls up into the funnels themselves.

Every team has an interest in filling the funnel: the more collected, the more everyone benefits.

But in the final 30 seconds of each session, after the frenetic quest to collect the balls, a second, cutthroat challenge awaits: Along the stem of each tower are short branches, or bars, at varying levels that the teams — choosing the mechanism of their choice such as hooks, winches or extendable arms — try to direct their robots to ascend.

The higher the level reached, the greater the “multiplier” of the total point value of the balls they will receive. Success is getting as high as possible, and with six teams on the field, it’s a dash for the highest perch.

By meshing competition with common interest, the “First Global” initiative aims to offer a tonic to a troubled world, where children look past politics to help solve problems that face everybody.

The opening-day ceremony had an Olympic vibe, with teams parading in behind their national flags, and short bars of national anthems playing, but the young people made it clear this was about a new kind of global high school sport, in an industrial domain that promises to leave a large footprint in the 21st century.

The competition takes many minds off troubles in the world, from Russia’s invasion of Ukraine to the fallout from Syria’s war, to famine in the Horn of Africa and the recent upheaval in Iran.

While most of the world’s countries were taking part, some – like Russia – were not.

Past winners of such robotics competitions include “Team Hope” — refugees and stateless others — and a team of Afghan girls.

Experts working to negotiate a new treaty on biodiversity in ocean areas beyond national jurisdiction today deliberated ways to govern marine genetic resources � namely, materials of real or potential value � as well as the specific types of resources …

France’s recent decision to close some of its military bases and reduce the number of its troops in Mali has sparked mixed reaction from the local population. Last week, French President Emmanuel Macron announced that his country would start closing t… 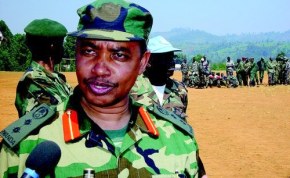 Cape Town — South African intelligence officials are accusing the Rwandan Embassy in Pretoria of involvement in an attempt to assassinate an exiled Rwandan general living in Johannesburg, a South African newspaper reports.

The New Age of Johannesburg said on Monday that South Africa’s State Security Agency was considering pushing for the closure of the embassy after Pretoria expelled three Rwandan diplomats last week.

The newspaper quoted unnamed sources as saying that a raid by the Hawks, a South African law enforcement agency, was alleged to have linked one of the expelled diplomats to an “attempted hit” on former army chief Faustin Kayumba Nyamwasa.

“A highly placed source said South African intelligence officials were tipped off that an attack on Nyamwasa’s home last Monday was being orchestrated using resources of the Rwandan embassy,” New Age reported. “Hawks officials acted promptly, moving Nyamwasa to a secret location to ensure his safety.”

The alleged assassination attempt has brought South African-Rwandan diplomatic relations, already strained over the killing of an exiled Rwandan leader last year, to a new low.