Forces loyal to Libya’s internationally recognized government have seized a major airbase south of Tripoli from rival forces who have been trying to take over Libya for more than a year.

A top military commander says the Tripoli-based Government of National Accord (GNA) has complete control of al-Watiya airbase. Observers call this a huge setback for commander Khalifa Haftar and his Libyan National Army (LNA).

The commander says GNA forces captured a Russian-made Pantsir air defense system mounted on a truck and posted video of what he says is the destruction of a second Pantsir system from the air.

“Today’s victory does not constitute the end of the battle but brings us closer than any time before to the bigger victory, the liberation of all towns and regions and bases,” Prime Minister Fayez al-Sarraj said late Monday.

The LNA is calling its withdrawal a tactical maneuver. It insists al-Watiya has no military importance and that any equipment left behind is old and useless.

The GMA controls the capital, Tripoli, but the LNA controls eastern and southern Libya, most of the oil fields and refineries, and the key Mediterranean port of Sirte.

Both sides have been battling for Tripoli for more than a year with most of the fighting concentrated in the capital’s suburbs and thousands of civilians caught in the middle.

The GMA is the United Nations-installed government, and the LNA is Haftar’s rival administration, headquartered in eastern Libya.

Egypt, Russia and the United Arab Emirates are the LNA’s chief backers, while Turkey has sent drones and defensive equipment to the GNA.

Efforts by both Turkey and Russia, along with the European Union and United Nations, to set up a lasting ceasefire in Libya and open the door to a political settlement and elections have failed.

The U.S. Embassy in Tripoli again called for all sides to give peace a chance, saying “there is no military solution to the crisis in Libya.” 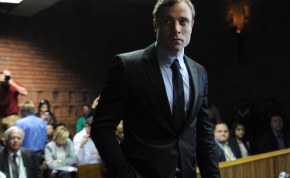 Pretoria — A third State witness testified about a woman screaming for help as Oscar Pistorius’s murder trial entered its second day on Tuesday.

They were giving evidence in the High Court in Pretoria about the night one of the country’s most famous athletes shot dead his girlfriend Reeva Steenkamp.

Charl Johnson took to the stand after lunch on day two of the televised trial, and confirmed in chilling detail the testimony given earlier by his wife, lecturer Michelle Burger.

The couple, who live in a security complex bordering on the Silver Wood Country Estate where Steenkamp died, said they were woken in the early hours of February 14, last year, by a woman’s cries, followed by that of man and a volley of gunfire.

“I stood on the balcony and heard a woman shouting for help, then a man shouting help, help, help,” Johnson said under questioning from prosecutor Gerrie Nel.

He then got up and went to his bedroom balcony, where he heard more screaming, he told the court, where Pistorius pleaded not guilty to premeditated murder on Monday.

Johnson added: “I could hear she was in trouble… clearly distressed calls.”

The couple tried to call the security post of their complex, Silver Stream Estate, but mistakenly dialled a number at a previous address, he said.

“I then went back to the balcony and I heard the woman’s scream. The intensity and fear escalated and that’s when the first shots were fired,” said Johnson.

He said the last scream came after the last gunshot was fired.

Quizzed on how many shots he heard, Johnson said he initially thought five or six shots.

“I subsequently learned it was four,” he said.

The witness recalled how he and his wife learnt the next day that Pistorius had shot Steenkamp and realised that they had not, as they assumed in the night, been woken by a burglary in progress at the nearby house.

Like Burger, he was adamant that he had heard the voices of both a man and a woman.

This has been vigorously disputed by Pistorius’s defence lawyer Barry Roux.

In relentless cross-examination of Burger on day one and two of the trial, Roux put it to her that Pistorius’s voice rose when he was anxious, making him sound like a woman.

He put it to Burger that she only heard one person — the accused — cry out before the shooting, but that she was too biased against him to make the slightest concession that might play in his favour.

But Burger, an economics lecturer, firmly stuck to her version of events,

“My statement is a few pages long. I’ve been testifying for hours and I can explain the minute details to the court,” she said.

Later Roux also disputed Burger’s statement that the cries faded only after the shots, saying Steenkamp would have been too severely injured to scream at this point.

On hearing this, Pistorius broke down for the first time since the trial began on Monday. He held his head in his hands and cried, and accepted a tissue from a woman sitting with his family in the public gallery.

The Paralympian gold medallist’s version of events is that he believed he was shooting at an intruder hiding behind the locked toilet door of his house when he killed Steenkamp.

In a statement read to the court on Monday, he rejected the notion that they had a row before her death as “unfair and incorrect”.

Prosecutor Gerrie Nel is trying to prove he is lying, and another witness he called earlier on Wednesday told the court she heard loud voices coming from the direction of Pistorius’s home on the night of the shooting.

Estelle van der Merwe, a neighbour of Pistorius in Silver Woods, said she was kept from sleep around 2am by what sounded like people fighting.

“It lasted for about an hour,” said Van der Merwe said, testifying in Afrikaans through a translator.

The court adjourned at 3pm on Wednesday.

US Begins Counter-terrorism Training in Africa Amid Upheaval

The United States’ yearly counter-terrorism training program for African forces began on Sunday in Ivory Coast at a time of upheaval in which Islamist fighters control large areas, coups are on the rise and French forces are winding down.The training p…

Loik Le Floch-Prigent, the former head of Elf, the French oil giant, has been extradited to Togo after he was arrested in the Ivory Coast as part of a fraud investigation.